THE FUTURE OF DRIVING IN THE ERA OF ELECTRIFICATION: GENESIS UNVEILS X SPEEDIUM COUPE INTERIOR 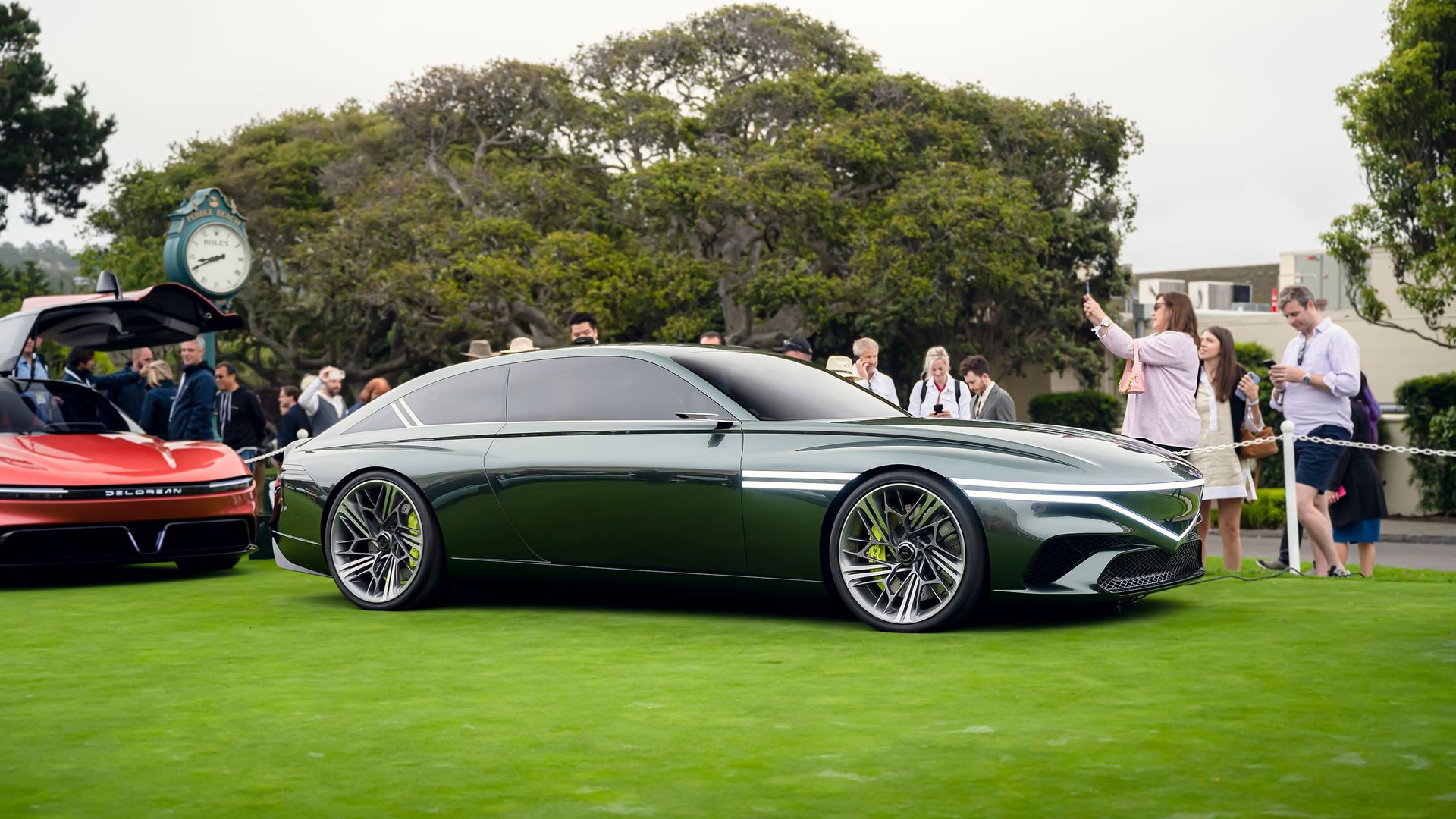 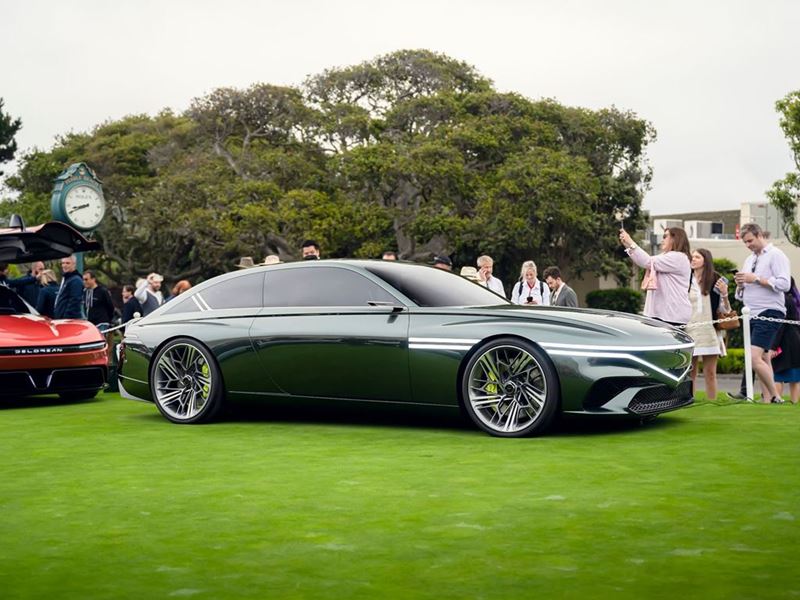 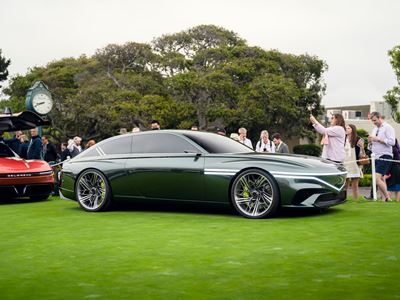 The Pebble Beach Concours d’Elegance is an automotive event held in August each year on the Pebble Beach Golf Links in California. Considered the most prestigious event of its kind, it is the grand finale of Monterey Car Week.

Exceptional design and performance have set Genesis vehicles apart since the brand’s inception. In pursuing its new vision for electrification, Genesis has put forward its unique design language to amplify the fun aspect of the driving experience. Born out of a “freestyle” design exercise, the X Speedium Coupe inherits the brand’s signature Athletic Elegance in an even more progressive way.

The X Speedium Coupe concept made its debut in April at Genesis House New York. First shown as an exterior model, its interior design was developed over the past five months by the Genesis design group.

“The X Speedium Coupe was conceived as an internal design exercise that we later decided to reveal publicly. It was nothing more than a hard model built on our Athletic Elegance design identity,” said Genesis Chief Creative Officer Luc Donckerwolke. “Given the positive reception it received at the event, we chose to complete the concept and present it to discerning attendees at the Pebble Beach Concours. The interior captures the Genesis brand’s “Beauty of White Space” design ethos, which suits various luxury lifestyles and adds to the appeal of the dynamic GT.”

The Genesis X Speedium Coupe’s most eye-catching exterior feature is the extended full-width lamps that reinterpret the Crest Grille. This detail carries the brand’s signature look into the electrification era while symbolizing Genesis’ transformation to a pure electric car brand.

The shape of the body resembles an hourglass when viewed from above. The curvaceous form accentuates the wheel arches and creates a muscular presence. From the side, the Parabolic Line extends from the front to the rear. The deliberate “anti-wedge” profile gives the car a relaxed attitude, which is balanced by tension between convex and concave surfaces. The elliptical tail and V-shaped brake light combine to create a striking contrast at the rear.

Named after Korea’s famed Inje Speedium race circuit, the X Speedium Coupe embodies Genesis designers’ passion for motorsports. The car’s metallic emerald hue, Inje Green, is named after the mountainous landscape that surrounds the racetrack. It completes the image of a classic car that personifies dynamism, speed, and timeless elegance.

A Driver-Oriented Layout and UI Concept

The interior of the Genesis X Speedium Coupe leverages a classic Korean design principle known as “the Beauty of White Space.” Inspired by Korean architecture, this aligns closely with the ideology of reductive design and is expressed through a minimalist and pure form language punctuated by strong design elements.

The asymmetric, driver-oriented layout is a continuation of the theme found on Genesis’ more recent concept cars, in which all the control systems and displays surround the driver. The instrument panel and floating center console wrap around the driver cockpit, amplifying the driving experience in the era of electrification.

This effect is further accentuated by the interior’s contrasting color palette, which clearly distinguishes the driver’s area from the passenger space. The driver’s seating area is set in Pinegrove Green, which perfectly complements the Inje Green exterior. The contrasting Monterey Gold around the driver’s seat—a color inspired by the scenery along the Northern California coast—alludes to the yellow flowers and golden sand found in the region.

In addition, Genesis is exploring the future of audio experiences through a new sound architecture, which blends technology and art while highlighting the brand’s attention to detail. In collaboration with sound mater Guk-il Yu, the head of Metal Sound Design—a company that specializes in high-performance speakers—the X Speedium Coupe features strategically-placed speakers to fill the interior with rich sound.

The driver-focused cockpit has a curved OLED display that visualizes the heritage of high-performance cars. The cluster’s GUI includes a center-mounted motor output indicator designed in a “newtro” style, which is a stark contrast to the RPM gauges found in ICE models. The vertical display on the right side of the driver’s seat features an integrated touch display with an optimized UI design. The display includes the start button as well as the multimedia and vehicle control functions.

Craftsmanship that Lives in the Details

The X Speedium Coupe’s cargo area features X straps on top of the loading space, a detail inspired by the brand’s unique G-Matrix Pattern that underlines the dynamic coupe experience. This design feature was derived from the Genesis Mint Concept.

Another noteworthy detail is the leather—the material itself as well as its application. The quilted pattern on the leather seats and the door trim gives the impression of a classic sports car. Meanwhile, the steering wheel features cut-off leather that were salvaged from repurposed car seat materials and woven together.

Two types of leather were used in the interior: vegetable-tanned leather and an innovative new breathable grain leather. The vegetable-tanned leather is treated with plant-derived substances—such as citrus fruits and mimosa—and processed without chromium. Compared to ordinary leather, the breathable grain leather used in the upper part of the cabin requires less water and lower levels of chemicals to manufacture. The threads used in the finishing process are made from repurposed plastic, adding to the material’s durability and water resistance factors.

Monterey Car Week is held in and around Monterey County every year and features nearly 30 different events including car shows, races, and auctions. The automotive week concludes with the flagship event, the Pebble Beach Concours d’Elegance, which is at its 71st edition this year. Genesis has been participating in the Concours d’Elegance annually since its brand launch in 2015. The brand has showcased a series of concept cars throughout the years to present futuristic designs with unique elements only Genesis can bring to life: Vision G Concept (2015), New York Concept (2016), GV80 Concept (2017), Essentia (2018), Mint (2019), X Concept (2021).