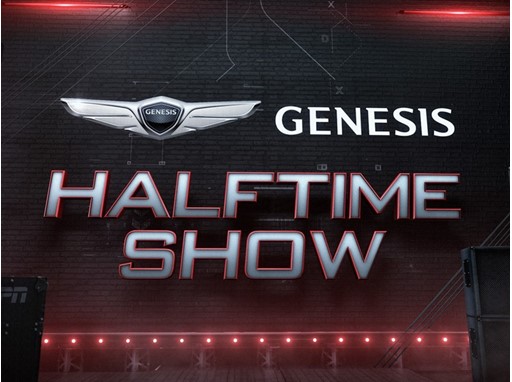 The Genesis Monday Night Football Halftime Show will be hosted by Suzy Kolber with Pro Football Hall of Famer Steve Young and Louis Riddick. A special custom opening each week featuring landmarks and vistas from the host city will introduce that week’s musical artist and flow into the halftime show, which will be presented commercial free, courtesy of Genesis.

The cornerstone of the agreement will be a unique musical performance to close the halftime show, by a different artist each week. In week one, Boyz II Men will perform a special tribute to Aretha Franklin in Detroit with special guest Tori Kelly. On select Monday nights, these performances will take place live, on the field, during halftime of the Monday Night Football game. Some of the additional artists to be featured during the season include Zac Brown Band, Ciara and Daughtry.

Genesis will be incorporated into Monday Night Football through a number of branding elements, including on-screen graphics, desk signage, tune-in messaging, audio mentions and more. The brand will also receive commercial inventory throughout the season.

“Genesis is partnering with ESPN to re-define Monday Night Football halftime shows and expand our presence as the official luxury car of the NFL,” said Manfred Fitzgerald, Executive Vice President and Global Head of the Genesis Brand. “We bring culture into everything we do at Genesis and we’re excited to combine sports and music performance for Monday Night Football.”

Added Renie Anderson, SVP, NFL Partnerships, Sponsorship & Consumer Products, “One of the benefits of being a League partner is that Genesis has the ability to leverage this authentically with ESPN, unlike any other in their category. Having the NFL’s official luxury automobile have a presence in one of the premier brands across the entertainment landscape – Monday Night Football – is a perfect combination.”

Said Ed Erhardt, President, Global Sales and Marketing, “This is the marquee position in one of the most storied franchises in sports history. Genesis’ innovative advertising and sponsorship approach is reflective of their brand and will give them exposure to the vast, passionate fan base of the NFL. We’ve worked hand in hand with them and with the NFL to bring this to fruition and we can’t wait to watch it unfold throughout the season.”

Genesis Motor America
Genesis Motor America, LLC is headquartered in Fountain Valley, Calif. Genesis is a global luxury automotive brand that delivers the highest standards of performance, design and innovation. A total of six new Genesis models, including the flagship full-size G90 luxury sedan, mid-luxury G80 and G80 Sport sedans and soon-to-arrive G70 near-luxury sport sedan, will launch by 2021 and compete with the world’s most renowned luxury car brands. All Genesis vehicles sold in the U.S. are covered by an industry-leading warranty with enhanced roadside assistance and concierge services. In just the first half of 2018, Genesis won highest-ranked brand in the automotive industry awards for quality and owner satisfaction from highly-respected, third-party experts Consumer Reports, J.D. Power and AutoPacific.

For more information on Genesis and its new definition of luxury, please visit www.genesis.com

Please visit our media site for the latest news at www.genesisnewsusa.com