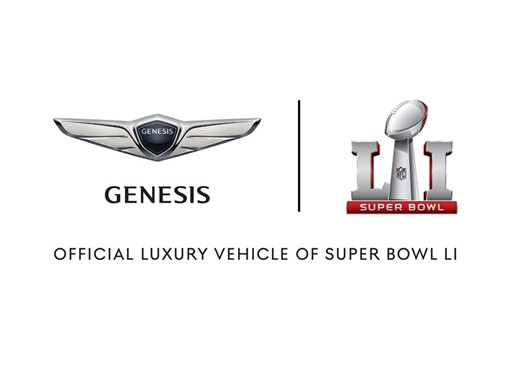 FOUNTAIN VALLEY, Calif., Jan. 30, 2017 – Genesis, the official luxury vehicle of Super Bowl LI, is set to give fans seven days of unforgettable experiences during the biggest sporting event of the year as the presenting sponsor of the NFL Experience. Genesis will officially open its activation area at the George R. Brown Convention Center in Houston on January 28 where participants will have countless events, exhibits and interactive games to choose from.
At the Genesis booth, fans have the opportunity to participate in Genesis attractions such as a digital photo booth and autograph signings from current and former NFL players. Interactive Genesis activities also include the Genesis Gauntlet and the Genesis Touch Pass where fans can test their wide receiver and quarterback skills by running routes that require supreme concentration and attempting to master one of the most challenging throws from the quarterback position.
NFL Experience will take over Houston for seven days leading up to game day. The event features activations such as a Super Bowl Ring Exhibit, photo opportunities and a Clinic Field run by current and former NFL players. Additional activations include the NFL PLAY 60 Zone, where kids can test their football skills along with exhibitions that provoke curiosity about the history of the NFL.
“There is always an incredible amount of excitement surrounding the Super Bowl each year, and Genesis wants to take that energy and anticipation to new heights,” said Erwin Raphael, general manager of Genesis in the U.S. “We know that fans look forward to watching the Super Bowl, but now we’re giving them the opportunity to put themselves in the mindset of the players by offering interactive activities that make their experience more fulfilling.”
Additional activities for guests include scheduled NFL legend and current player autograph signings, social media photo opportunities and a post-event test drive opportunity for a $50 NFLSHOP.com gift card.
Guests can register for the NFL Experience on the NFL’s “Fan Mobile Pass” single sign-on system. The mobile pass serves as users’ credentials for on-site activities.