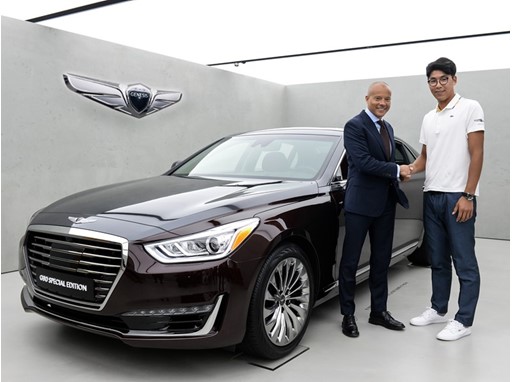 SEOUL, SOUTH KOREA., April 11, 2018 – Today, Genesis announced a five-year partnership agreement with world-class tennis player Hyeon Chung, who will become the brand’s first tennis ambassador. This announcement expands the reach of Genesis beyond football and golf into the international tennis arena. A ceremony marking the occasion was held yesterday at Genesis Gangnam, the brand’s first standalone showroom designed by the Office for Metropolitan Architecture.
“As a global luxury brand, we are extremely proud to partner with Hyeon Chung as an ambassador of Genesis and embark together on a journey filled with open possibilities,” said Manfred Fitzgerald, Global Head of the Genesis Brand. “His unyielding level of passion, competitive spirit, and respect for his profession and competitors are traits that Genesis shares.”
Chung, currently ranked 19th in the ATP rankings, is the highest ranked South Korean tennis player in history. He recently reached the Grand Slam semi-finals at the 2018 Australian Open and quarter-finals at the 2018 Miami Open, after turning pro in 2014.
“Ever since I was young, I always dreamed of playing tennis on a global stage while representing my Korean roots,” Chung said. “To be a part of an exciting Korean brand like Genesis allows me to do just that.”
Through 2022, the Genesis logo will be displayed on Chung’s athletic apparel, and the brand will provide Chung with a Genesis vehicle for transportation. Genesis is also the title sponsor of the Genesis Open on the PGA Tour in the United States and the Genesis Championship on the KPGA tour in South Korea, as well as the official luxury car of the NFL.