A LUXURY SPORT SEDAN FOR ALL SEASONS: GENESIS G70 RECOGNIZED WITH AWARDS FROM LEADING MEDIA ASSOCIATIONS 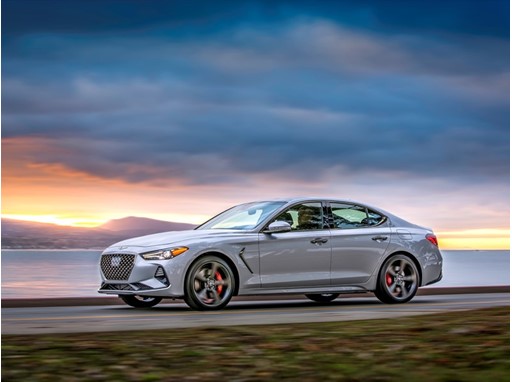 FOUNTAIN VALLEY, California, June 4, 2019 — The 2019 Genesis G70 received awards in the last two weeks from two leading media associations, in recognition of its outstanding overall performance. The Southern Automotive Media Association (SAMA), based in Miami, Fla., bestowed G70 with its Best Panoramic Sunroof Sedan award at its annual Topless in Miami drive event, while the New England Motor Press Association (NEMPA) named G70 its Best Winter Sedan at the NEMPA MIT Technology Conference held in Boston, Mass.
“These two awards represent affirmation from respected media professionals that our engineers succeeded in making the Genesis G70 luxury sport sedan one of the most highly capable all-season sedans.” said Erwin Raphael, Chief Operating Officer, Genesis Motor America.
Each year, both NEMPA and SAMA honor new vehicles that stand out in their respective classes at an annual media association gathering. As the first Genesis model in the highly competitive entry luxury segment, G70 outperforms legacy luxury sport sedans with driver-focused performance. G70, which was named the 2019 North American Car of the Year, as well as receiving more than a dozen other prominent industry awards in recent months, resets benchmarks and expectations among luxury sport sedans, with holistic integration of performance, body strength, refined luxury and aerodynamic design. Pricing starts at $34,900.
Genesis Motor America
Genesis Motor America, LLC is headquartered in Fountain Valley, Calif. Genesis is a global luxury automotive brand that delivers the highest standards of performance, design and innovation. All Genesis vehicles sold in the U.S. are covered by an industry-leading warranty with enhanced roadside assistance and concierge services. Within the past year, Genesis has won highest-ranked brand in the automotive industry awards for quality and owner satisfaction from industry experts such as J.D. Power, AutoPacific, and Strategic Vision. The newest Genesis product, the G70 luxury sport sedan, has garnered broad acclaim being named the 2019 North American Car of the Year, the MotorTrend 2019 Car of the Year, as well as a category winner in the Car and Driver 2019 10Best awards, among a dozen others.
For more information on Genesis and its new definition of luxury, please visit www.genesis.com.
Please visit our media site for the latest news at www.genesisnewsusa.com.
Genesis Motor America on Twitter | YouTube | Facebook | Instagram