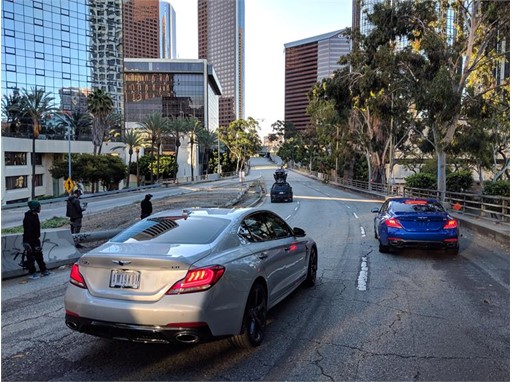 FOUNTAIN VALLEY, California, June 14, 2019 – This week, Genesis Motor America revealed the second “The Art of the Stunt” video featuring the 2019 Genesis G70. In the three-part video series, professional drivers demonstrate the dynamic agility of G70 while recreating classic scenes of evasive driving from classic films—and then show how the scene was performed with a behind-the-scenes look.
Working with Donut Media and award-winning film industry veterans and professional drivers, Genesis produced the footage to engage performance enthusiasts and movie aficionados alike.
“Genesis G70 embodies the spirit of thrilling driving, so it was only natural to put its dynamics to the test with a high-performance stunt,” said Kate Fabian, head of marketing at Genesis Motor America.
In this second set of videos, stunt driver Tanner Foust pays tribute to an iconic scene from Baby Driver, attempting a “180-reverse-to-drift” maneuver, within inches of a truck blocking the way. The third pair of videos will be released on June 19.
Short Video of G70 “Art of the Stunt” Episode 2:

As the first Genesis model in the highly competitive entry luxury segment, G70 outperforms legacy luxury sport sedans with driver-focused performance. G70, which was named the 2019 North American Car of the Year, as well as receiving several other prominent awards in recent months, resets benchmarks and expectations among luxury sport sedans, with holistic integration of performance, body strength, refined luxury and aerodynamic design. Pricing starts at $34,900.
Genesis Motor America
Genesis Motor America, LLC is headquartered in Fountain Valley, Calif. Genesis is a global luxury automotive brand that delivers the highest standards of performance, design and innovation. All Genesis vehicles sold in the U.S. are covered by an industry-leading warranty with enhanced roadside assistance and concierge services. Within the past year, Genesis has won highest-ranked brand in the automotive industry awards for quality and owner satisfaction from industry experts such as J.D. Power, AutoPacific, and Strategic Vision. The newest Genesis product, the G70 luxury sport sedan, has garnered broad acclaim being named the 2019 North American Car of the Year, the MotorTrend 2019 Car of the Year, as well as a category winner in the Car and Driver 2019 10Best awards, among a dozen others.
For more information on Genesis and its new definition of luxury, please visit www.genesis.com.
Please visit our media site for the latest news at www.genesisnewsusa.com.
Genesis Motor America on Twitter | YouTube | Facebook | Instagram